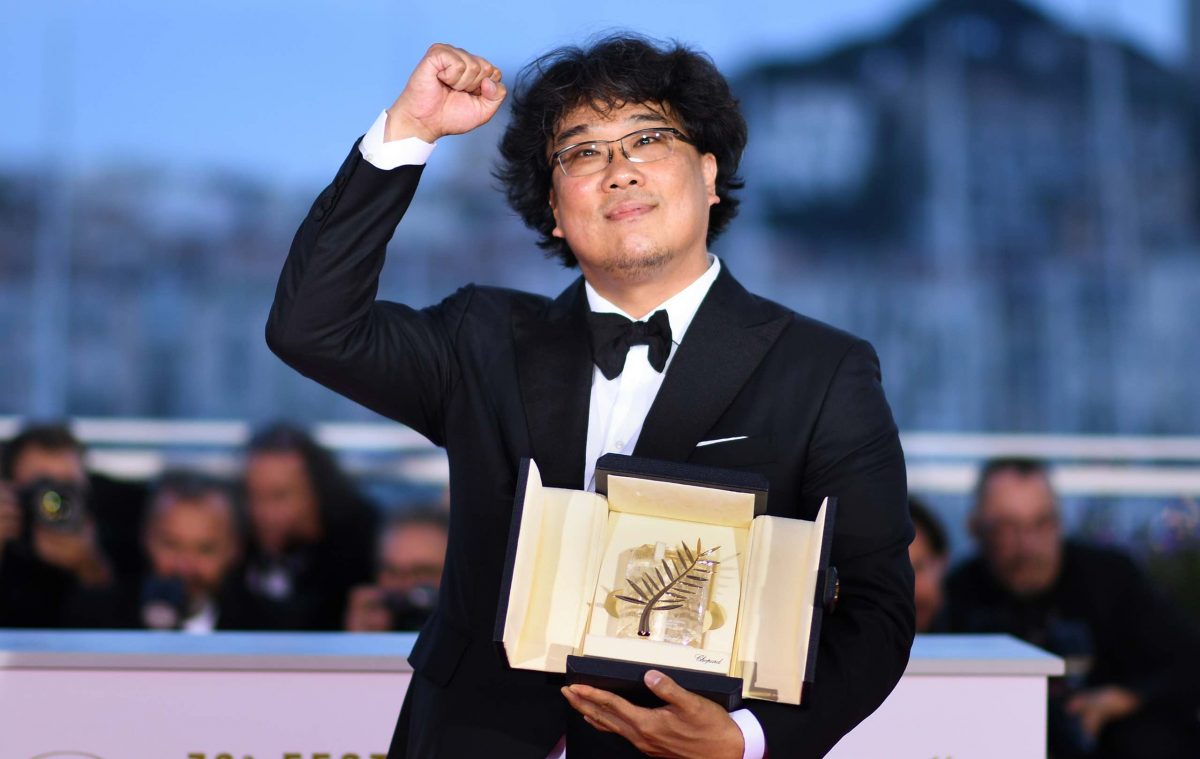 Several times he was close to being awarded in Cannes: With his Han River horror “The Host” in the section “Directors Fortnight” as well as with his English-language project “Snowpiercer”. Two years ago his “Okja” left a slightly bitter taste in the official festival selection, being produced by the famous streaming platform Netflix, which was not welcome on the Croisette.

This year, Bong Joon Ho returns with a feature film produced in South Korea and filmed in his mother tongue. It tells the story of an ordinary family, whose son is hired as an English teacher by the rich Park family. Through lies and manipulation, all members of the poor family manage to get themselves hired. The tragicomedy depicts the humor, horror, and sadness of the situation, when one wants to live a prosperous life, but runs up against reality.

Palme D’Orfor “Parasite” marks the first Korean film to ever win the prestigious prize in the 75thstory of the Cannes film festival.

We spoke to Bong Joon Ho after the film premiere in Cannes.

When did the idea of the film come to you and why you named it “Parasite”?

When I was working on “Okja”, I kept asking myself questions like what would happen if two families from different social classes would meet. My original title was The Decalcomanie. But once I began writing my script I have focused on the poor family and the narrative started to follow their point of view. The poor family hopes for ordinary life, but even that is hard to achieve. So they are pushed into a parasitic relationship. Since the focus has changed so has the title. It became Parasite.

Why did you use stone as symbol for “wealth” and smell for “poverty”?

In Asian culture collecting stones is a very old-fashioned tradition. Some of the stones cost thousands of dollars. So his kind of hobby poor people can hardly afford. In my film Park Seo Joon brings stone to his friend Ki Woo. Through him Ki Woo gets a job as a tutor. When the rich husband talks about the smell of his driver there is a certain reference to the people, who daily takes the subway. It is very insulting to the entire class of people. In reality rich and poor seldom meet each other. Everything is separated, the restaurants, different classes in trains and flights. Only becoming a tutor or working in the rich house might bring together these two different classes, so close they can practically smell each other.

“Parasite” is a fiction but realistic and shocking, because it comprises many social issues of Korean society. What do you think are the reasons for these issues?

We are living in an era when capitalism is the reigning order, and we have no other alternative. In today’s society there are ranks that are invisible to the eye. We keep them disguised, and superficially look down on class hierarchies as a relic of the past, but the reality is that there are class lines that cannot be crossed. Where does it come from: corruption, craziness of the society? In my film it is coming out of my personal vision and my creation, my own strangeness. I can assure you that the Korean society is much better and healthier than I am.

You asked the press not to recall too much of the story. I wonder how this worry can be expressed in our times of social media and smartphones, culture of instant information delivery. Has the gadgets and social media affected the way you make films?

I think the most important job of a film director is to control rhythm and speed of the story. Depending on the information you have access to before launching the film, the reception of that rhythm and speed can change and it could affect the perception and meaning of my work. I think social media can have a bad influence on creators and creating process. I do not use social media and I do not have accounts on Facebook, Instagram or Twitter. It’s not coming from the opposition to the new trends of the society but moreover from my own fear to be too much networked, and I prefer to be on my own.