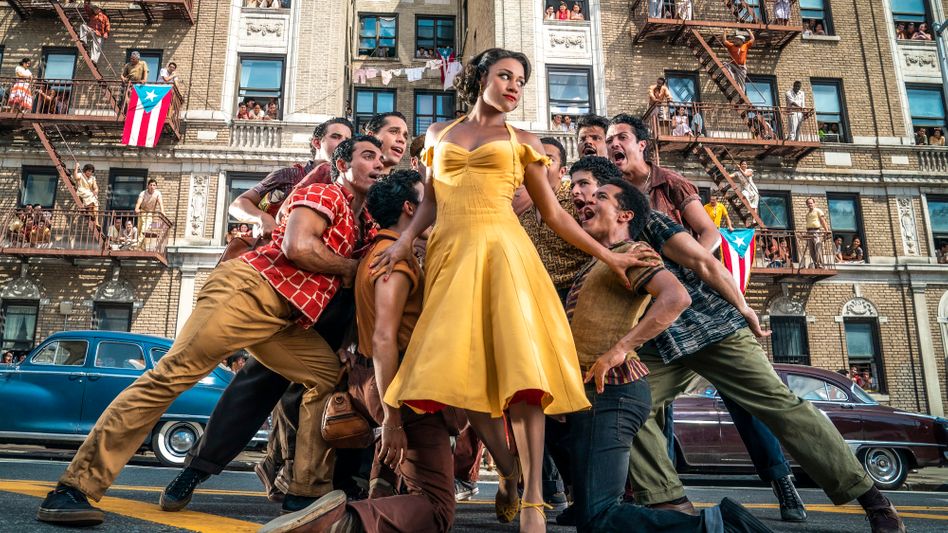 Above the slums of Manhattan’s West Side, hangs a huge cast-iron demolition ball – a symbol of urban renewal and the inevitable fate that destroys human destinies. We are in the late 1950s. There is a construction site and soon the Lincoln Cultural Center in the Upper West Side in New York will be built. But it’s also the time of war between two factions: the “white guys” –descendants of European immigrants – from dysfunctional families, and others who came here for the American dream – from Puerto Rico. „The Jets“ leader Riff has a best friend: Tony. „The Sharks“ are led by Bernardo, who has a sister, Maria. WhenTony and Maria accidentally meet at a dance floor, Shakespeare’s immortal love story “Romeo and Juliet” begins. Only there will be more victims as a result of this drama.

When the musical with the compositions of Leonard Bernstein was staged on Broadway, Steven Spielberg was still a child. He watched the original “West Side Story”, directed by Robert Wise and Jerome Robbins, as a teenager. The film was awarded eleven Oscars. The genre musical finally ceased to be a theatrical entertainment and entered the real streets, becoming interested in the needs of people with their problems. In fact, it was literally filmed on the streets of the Upper West Side shortly before its conversion.

“West Side Story” was a movie that accompanied Steven Spielberg since his childhood. He had long dreamed of remaking it, but he did not dare, because – in his own words – he was not familiar with the genre of the musical. This, however, is not entirely true. Let us recall at least the second part of his “Indiana Jones”, which begins with a musical episode “Anything Goes” performed by Kate Capshaw. After reviewing the old film and comparing it with the recent one, I came to the conclusion that I prefer the Spielberg’s version. Why?

Spielberg does not change the story. It’s still about the 1950s, but he exacerbates the conflicts – from social inequality to xenophobia. Therefore, his dialogues sound surprisingly modern. And many of them are in Spanish, without translation. Such was the desire of Spielberg, who believes that if the film is about both English-speaking and Hispanic New Yorkers, then the film should accurately convey the atmosphere of the city.

In Spielberg’s version, the beginning of love between Tony and Maria looks more convincing. Not to forget that a dark-skinned girl with Colombian roots, Rachel Zegler, played Maria, and not a “white American”, which was the case in the 1960s version where Natalie Wood, whose skin was covered with dark make-up, which did not necessarily make her Latin. Moreover today, such a decision would appear ridiculous and somewhat nationalistic. The same paradox is caused by the make-up of George Chakiris, an actor with Greek roots who played a Puerto Rican in the earlier film. In his place, David Alvarez is much more believable. Guys of the fighting factions look like real street hooligans in Spielberg’s picture. In the picture of the 1960s, they are combed and emasculated dandies in the style of Frank Sinatra.

Times have changed. Today we live in a faster and more active world. Therefore, the speedy temperamental dances in the Spielberg film with numerous acrobatic stunts are more likely to “ignite” the viewer than those shown in the previous picture. It is also nice to see that women’s musical scenes are included in the modern version, while in the previous one, mostly men sing and dance. Another change in Spielberg’s work has to do with a tomboy girl who dreams of becoming part of the “Jets”. Spielberg casts a transgender guy, played by non-binary Iris Minas, for the role. In interviews, Steven Spielberg often emphasizes that he was guided by the Broadway musical, not by the film. He is probably being a little disingenuous here, especially because he invited Rita Moreno – who in the original film is the pharmacist’s wife – to play the role of the pharmacy owner.

On the whole, Spielberg’s picture is undoubtedly a tender memory of the past, his own youth, as well as a declaration of love for New York and classic cinema, which is – at least according to his vision – still able to revive the past and give hope for the future.