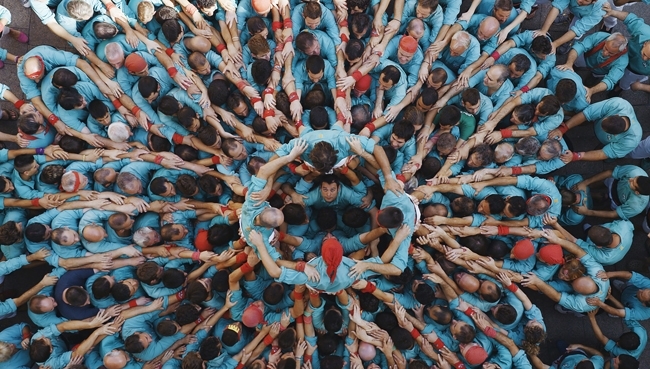 Why did you start as an aerial photographer?

I wanted to be a scientist. And you surely know the story about my trip to Kenya for studying lions. I needed to write my graduation thesis on lions together with my wife. We were following one special family of lions for a long time. I took pictures, my wife wrote notes. Those days I discovered that photography can be perfectly used to collect information. It could capture and relay what words cannot. My first model was a beautiful blond – a lion called Jinx – whom I followed with my first Canon camera for three years at the beginning of the 80s. At the same time, as a family man, I needed to earn money and make my living. So I was offering hot-air balloon flying for tourists. One day, I combined flying and photography and found it fresh and fascinating. Those aerial shots really helped me to see from above how the lions mark their territory, and many other things you will never find out by just taking pictures from the ground. When I came back to Paris I become professional photographer.

How do you prepare your aerial shooting?

First, I need to choose the country I’d like to capture and let my team contact local scientists to select specific sites of interest and – very importantly – local authorities to ask for permission. Flying permissions can be tricky as airspace is generally highly regulated and aerial photography can be prohibited or viewed as spying in some countries. And even when a permit is issued, work rarely continues without further interference. Very often, a military officer will climb aboard the helicopter and the films will be scrutinized at lengths before they are returned. Once all permits are obtained, the team needs a means to take to the skies. While I have my own helicopter for work in Europe, in some countries, helicopters or appropriate high winged aircraft are simply not available, which means one must be brought on location. Sometimes we make pictures with whatever is available on location – ultra light places, paragliders or even parachutes.

What is your new film HUMAN about?

HUMAN is made up of exclusive aerial footage and first-person stories told onto camera in order to create a portrait of humanity today. I am one man among seven billion others. For the past 40 years, I have been photographing our planet and its human diversity, and I have the feeling that humanity is not making any progress. I didn’t look for an answer in statistics or analysis, but in man himself, using my camera. It is in faces, and words that I find a powerful way of reaching the depths of the human soul. Each encounter brings you a step closer. Each story is unique. By exploring the experiences of others, I was in search of understanding. Do we all have the same thirst for love, freedom and recognition? In a world torn between tradition and modernity, do our fundamental needs remain the same? Deep down, what does it mean to be human today? What is the meaning of life? Are our differences so great? Do we, in fact, share more values than we might have imagined? And if so, why can we not manage to understand one another? I wanted to pose these questions and discuss humanity through what, at first; it seemed a crazy, utopian project.

By watching HUMAN there is still an impression that it’s a photographic project, not a film …

Of course I am primary a professional photographer and not a filmmaker. And as such, I am mostly fascinated by frame and light. I use to work with two photographic genres – landscape and portrait. And this is what you see in the film. But I never wanted to limit my work only to photography. It is not possible to become a successful, creative personal by having limits. You need to have a broad focus, to test limits, and to go for more. I think that photography is more objective than film. Images just show and not really comment anything. Film has a stronger message and film directors have more power over an audience. That is why to become a successful filmmaker; you need to sharpen your mind, but to understand photography you just need to open your heart. As a photographer who makes films, I try to confront my audience with images more than stories. My film is different because I am photographer. For example I am showing those people telling their monologues and they speak with faces turned to my camera. They talk to your eyes. Regular filmmaker would certainly avoid this eye-to-eye conversation. So I try to make power of cinema to work for me by using photographic methods – frames, portraits, eye-to-eye contact and putting it in context of actual storytelling and moving images.

Where is your film released?

We managed to set up a new distribution model, which made those types of films available to the greatest number of people. I already used it in my film HOME, which was produced and distributed without profit simultaneously in cinemas, on television, DVD and Internet and it has been seen 600 million times. With HUMAN, we hope to succeed the same.