I was fascinated about the ugly world, it felt like wellness to me… 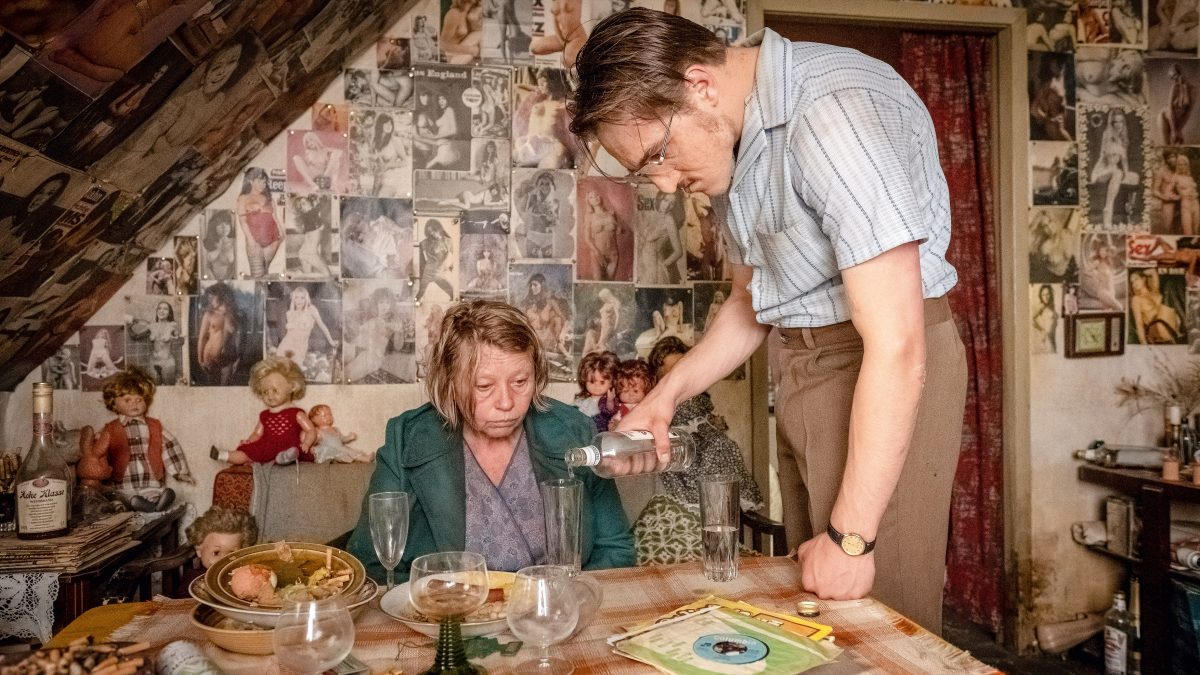 German film director of Turkish descent, Fatih Akin, portrayed in “The Golden Glove” a crime that occurred in his native Hamburg forty years ago. The film, which won no awards during the 69th Berlinale, sparked lively discussions.

The Golden Glove is probably the most famous pub in the Hamburg’s red light district, which is, even now, opens 24 hours a day, 365 days a year. During the 1970s, it had become a hunting ground for Fritz Honka. An unskilled laborer and bottom feeder, Honka looks like a pitiful loser at first glance. And none of the pub’s regulars could ever suspect the inconspicuous man with the broken face of actually being a prolific killer,  guilty of murdering and dismembering four women. Most of the barbs are directed at a sad collection of aged hookers slumped around the tables.

Even for ugly Fritz, they are too much. But Fritz has no choice, because the young and beautiful Petra, a pouting blonde teen goddess, never falls for him. Honka knows how to win the favor of the old women with free drinks and the offer of more back in his apartment.  They seem not to have any other choices in their lives, or maybe just one – the Salvation Army and confession to God. Once murdered, Honka sawed the women’s bodies into pieces and enclosed them behind a wooden trap door in his apartment. He blamed the smell on a Greek family cooking downstairs. There is a moment when one victim, a massive ex-prostitute, strikes back.

Honka has just beaten her in the face until she’s bloody. He sleeps on the bed where he’s raped her, while she goes to the fridge, calmly scoops out a jar of mustard and smears it on his dick. When he lunges for her, she kicks him hard in the groin and without changing expression goes back to her bottle of gin.

Though the killer and the pub are real, the film, which opens in 1970, is based on a novel by Heinz Strunk.  Located between repulsive horror and German black humor, it pays attention to Rainer Werner Fassbinder oeuvre thought without much compassion for the sufferings of humanity. The atmospheric vision of the 1970s is skillfully visualized by production designer Tamo Kunz and taken by cameraman Rainer Klausmann. The film’s true discovery is the 23-years old Jonas Dasser, who, in heavy make-up, does an excellent depiction of the aging Honka. After the premiere of the film in Berlin, we spoke with the director.

Fatih, you portray the main character, who is a serial killer, with great sympathy. How is it possible?

Because I think that the society has great responsibility for people like Honka. Because the punishment would be similar to what the Nazis did, when they wanted to eliminate sick people. And I believe that we have to take care of them.

What attracted you to the material?

I was not used to something like this world and the fact that it exists. I come from a society which is educated and socialized in a very different way. In my world we choose yoga, healthy food, we take care of our looks, we discuss business. But we are only part of the society. The other part is different, they smoke, drink, speak ugly. I was fascinated about the ugly world; it felt like wellness to me. I wanted to dive into a completely different mindset.

What did you know about the bar, The Golden Glove, before your film?

I was there several times, because my wife used to live next door and I was going there to buy cigarettes. The bar dates back to 1956 and it is always open. That is why it was so difficult to arrange shooting in it. When I started writing my screenplay, I became a regular in the Golden Glove. It was scary at first. People would stare at one like they would want to take the shit out of you. Sometime later they got used to me. I warned the owner that maybe my film would attract even more tourists to his place. He is a great guy, a real businessman. So he just said: “I just sell liquor. If people want to buy, why not?”

Were you influenced by Rainer Werner Fassbinder and German expressionism?

I love Fassbinder and it is a German film. But I tried not to be influenced.

You depict Germany 25 years after the World War Second. Why does everything and everyone look so broken?

Indeed Germany was a rich country and the period is known as “Wirtschaftswunder”. There was more work than workers. However my film is not about these achievements or the winners; it is about losers.

What drove you to the horror genre?

The more appropriate question is, “Why have you never made a horror film?” When you are a successful filmmaker in Germany, especially of different descent, your sponsors would put certain expectations on you . From me, they would expect that I tell a story about a Turkish girl who runs away from home, and her two brothers with a huge Döner-knife hunting her to kill. You feel like a child wanting different things which are not allowed, and so you continue to tell the story of the Turkish girl. The question “Why I did horror?” is that I think in the times of Netflix and Amazon, when we think the cinema is dying, only horror films look great on big screen.

I was recently interviewing an action film director; he told me the same about action genre …

Right, but horror is much cheaper to make.